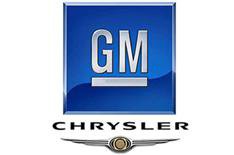 US car makers Chrysler and General Motors have said they will go bankrupt within six weeks, unless they're given a further $6 billion (nearly 4 billion) in state-funded loans.

The companies, which shared a $17.4 billion (about 11 billion) Government loan at the end of last year, have also requested a further $22 billion of aid to ensure their future survival.

Presenting their plans for long-term sustainability to the US Congress, the companies added that any loan package from Government would be considerably cheaper than allowing them to fall into liquidation.

The manufacturers' estimates suggested the price of bankruptcy would be $124 billion (about 88 billion) with the loss of three million jobs.

Bleak outlook
GM and Chrysler have increased the estimate of cash they need to survive by $14 billion, based on the worsening economy and the banks' refusal to release credit to potential car buyers.

GM also said it would focus on four brands - Chevrolet, Buick, GMC and Cadillac, for which it has requested a total of $30 billion in aid. The company would drop Saab and Saturn brands.

Chrysler has said it would cut 3,000 jobs and eliminate three models from its line-up, in exchange for $5 billion in aid.

Chrysler is pushing for an investment deal with Fiat, and has said a union with GM would also provide substantial benefits. Merger talks between GM and Chrysler collapsed last year when GM withdrew from discussions.

What next?
President Barack Obama has already set up an 'auto maker task force' that will review the plans submitted by Chrysler and GM.

The task force will also consider pleas by suppliers to the car industry for aid totalling more than $25 billion (around 15 billion).

Where the money will come from is also unclear. The aid, so far, has come from a $700 billion package set up to support the banking industry, but that money is expected to run out imminently.