* Senate rejects $14 billion loan * Wage cuts for workers at the heart of the debate * Suppliers refusing to extend credit to the companies... 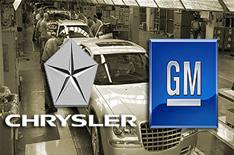 America's Senate has rejected a $14 billion rescue package for Chrysler and General Motors.

The two car makers, along with Ford, originally requested $34 billion (22.7 billion) in Government loans to keep them trading into March next year. Ford subsequently withdrew, saying that the conditions attached to the proposed loans were too restrictive.

The slimmed-down $14 billion (about 9.3 billion) package was presented as a compromise, but many Republicans refused to back it unless the United Auto Workers union agreed to wage cuts for its members before 2011.

It's not clear how quickly the failure of the bail-out plan will affect GM and Chrysler.

However, reports already suggest that suppliers to the companies are refusing to hand over parts without being paid up front.