The car's striking appearance lets you believe you're driving a classic American soft-top.

But that's not the end of the plus points. The burbly 3.2 V6 may produce just 215bhp, but its mid-rev pull is better than you'd expect and it emits a rich, throaty note above 4000rpm. The SRT-6 produces rather more at 330bhp, but isn't worth the extra money.

Drivers will love the seemingly endless grip from the tyres and the excellent body control, but the ride is poor and jars over even the slightest lump and bump.

Practicality's not great, either: the cabin may be comfortable enough for two, but the boot is awkwardly shaped and the hood folds into it, robbing most of its space.

Likewise, the low driver's seat and high window line make the cabin cosy, but restrict rear visibility, so it's tricky to reverse-park.

At least, refinement is good - hood up, most road noise stays outside; hood down, the cabin is calm and civilised, even at speed - and the equipment levels are high: leather seats, dual-zone climate control and cruise control are standard. However, the quality is poor for the price. 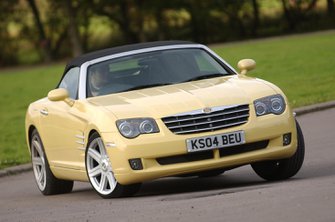