Chrysler, Ford and GM in trouble 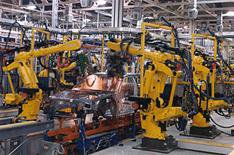 America's big three car makers Chrysler, Ford and General Motors are all on the brink of bankruptcy, according to latest reports.

GM has announced losses of $2.5 billion (1.6bn) in the previous three months, and analysts now say that the company has enough money left to last only until the end of the year.

GM's European brands include Chevrolet, Opel, Saab and Vauxhall. The European group didn't fare as badly as the US arm of the company, but revenues were down 15%.

As a result of its losses, GM has suspended merger talks with Chrysler, which is reported to have lost $400 million (253.5 million) in the past three months.

Meanwhile, Ford posted losses of $129 million (81.8 million) for the previous quarter. That's an improvement on last year, when it lost $380 million (241 million) during the same period, but it is still facing financial ruin.

The companys running costs were $7.7bn (4.9bn) during this quarter, leaving it with cash reserves of $18.9bn (12.1bn). That's enough money to last for just seven months if it continues to spend money at the same rate.

All three car makers are now lobbying the US government for assistance and President-elect Barak Obama has indicated he will back the US car industrys plea for a bailout from the US treasury.

Obama called the flagging car industry 'the backbone of American manufacturing' and said his team would create a more aggressive rescue package than the Bush administration.