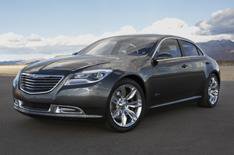 Chrysler has announced it will show two of its electric concept cars at the Geneva motor show next week.

The cars are part of the company's five-strong range of EV concept vehicles that are either all-electric, or use electricity to extend the fuel tank's range.

Although the cars are still considered medium- to long-term prospects for production, they're seen as crucial to Chrysler's survival as US Senate cash bail-outs depend on the company being able to demonstrate its future environmental credentials.

Chrysler 200C EV
This concept car is capable of driving 40 miles on electric power alone, which is extended to 400 miles when the petrol engine is used to charge the lithium-ion battery.

It is said to hint at how the next Chrysler 300C saloon could look, and is based on a shortened version of that car's rear-wheel-drive platform.

As well as its green powertrain, the concept car stands out for its new technology features.

These include being able to create social networks with friends, tracking their journeys, and linking the car with home computers to plan journeys, log stop-off points and ensure your favourite music is transferred from home-based systems to your car.

That should equate to a 0-60mph time of under five seconds and a top speed of 120mph.

Chrysler expects lithium-ion technology to give the car a range of 150-200 miles between charges.