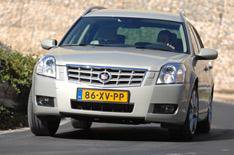 The Americans love a bit of in-your-face styling - that's why Cadillacs are famous for massive fins, lashings of chrome and, thanks to Bruce Springsteen, being pink.

This fondness for flamboyance could also be why the firm has never produced an estate car - there's no place in Caddy showrooms for something so conservative. Until now, that is.

Don't expect BMW-like levels of dynamic talent, either. The BLS is based on the ageing Saab 9-3, and despite its own suspension settings, it's no more involving to drive, with soggy handling, woolly steering and a crashy ride.

The BLS's interior also doesn't have the class of its German rivals - the materials aren't as plush and the assembly isn't as flawless.

However, the dash shares many of the Saab's fixtures and fittings, so everything is incredibly easy to use. The seats are terrific, too, and the cabin has plenty of space.

It's also a reasonably useful estate. Yes, the 419-litre boot is marginally smaller than the BLS saloon's, but it's easier to load, thanks to a massive opening and the absence of a load lip.

Also, the volume can be extended to 1273 litres by folding the back seats down, and the load floor is almost flat.