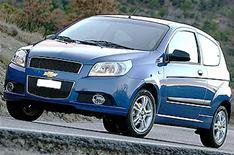 For Chevrolet, the future can't come soon enough. The company is on a mission to replace and add to its current range, but that won't happen overnight.

For now, Chevy is largely having to make do and mend with the models it inherited from Daewoo.

The Aveo is one such car. Formerly the Kalos, it's been given new front and rear ends and a smarter interior, but it's hardly the height of supermini sophistication. It's not bad, but there are plenty better.

The five-door version, available only with a 1.4-litre engine and a high specification, was revealed a while ago. Now it's the turn of the sharper-looking three-door (on sale in late summer), which will be offered only with base trim and a 1.2-litre engine.

That engine now has an extra 13bhp and 7lb ft more pulling strength, and at cruising speed you'll go another seven miles farther on every gallon, which means that carbon dioxide emissions have also been slashed.

Drive gently and it's decently flexible, but drivers in a hurry will need to work harder and pick their overtaking spots carefully.

The engine's smooth and sweet when cruising, and pretty quiet, too - quiet enough for you to hear some road and suspension noise.

The Aveo deals with bumps pretty well in its own bouncy way, but does little to encourage what might be called enthusiastic driving.

Still, that's hardly where its priorities lie. There's room for four people, at the expense of boot space, and getting in and out of the back requires no more than average dexterity, even in this three-door model.

The driving position's not great - you sit on the car rather than in it - and the absence of steering-column reach adjustment is also a bit of an issue.

Specification is pretty much what you'd expect in an entry-level supermini, and there's the option of air-conditioning for an extra 400, though it's a pity the car's price isn't closer to the 7300 originally hinted at.

Still, Chevy has done just about enough to keep the Aveo ticking over until its replacement comes along.