* We test new Ibiza supermini * Uses elderly engines, but drives well * On sale in June; prices not released yet... 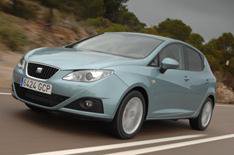 It's party time in Ibiza - and what's the cause for celebration? Well, Seat has scored a major coup, because it's the first Volkswagen group company to get its hands on the all-new supermini platform for the new Ibiza.

That's enough to put a little pop and fizz in Seat's headquarters - but it also puts some into the way the new car behaves.

The new chassis may be only 9mm longer between the axles than the old Ibiza's, but it's a whole lot bigger inside and out. What's more, the new models are on average 50kg lighter.

Although there's plenty of head and legroom for four people, the boot is the main beneficiary of the extra space, which is increased by 25 litres to 292litres - enough to swallow a baby buggy and a jumbo pack of Pampers.

Love it or loathe it, the Ibiza's sharp, angular styling is a million miles removed from the rather bulbous look of the old car. Apparently, the man who sketched it used to be the head honcho at Lamborghini's design department, but it's not just style that has driven the designer's pen.

With occupants surrounded by more metal and more airbags, Seat is confident the new car will achieve a maximum five-star Euro NCAP rating.

That's good news so far, but Seat might want to have a word in the ears of the chaps supplying the interior fixtures and fittings.

Many of the plastics are hard to the touch, and although the dash is attractive and simply laid out, overall the flimsy carpets and low-rent plastics give a rather utilitarian feel to the cabin.

One thing is for certain - the Ibiza can't match the attractive mix of colours, textures and the classy feel of a Vauxhall Corsa.

Things do get a whole lot better once you set off down the road, though.

The old Ibiza was always a sporty little number - nippy in town and a hoot on a country road, but the ride was a wee bit on the brittle side. Not any more.

The suspension is now so quiet, so supple and the body is so well controlled that there's a real depth of quality to the way the Ibiza rides - think junior VW Golf and you won't be far off the mark.

Pot holes, ridges and even raised drain covers did little to upset the Ibiza's equilibrium on our test drive (in where else but Ibiza?), and although the acid test will come on more demanding UK roads, we feel pretty confident the outcome will be much the same.

The handling may not be as overtly sporty as a Mazda 2, but the Ibiza grips well and drives predictably, and even if the steering does lack a little feel, we'll gladly take that in exchange for the absence of road noise and superior refinement every time.

Of course the Ibiza would be a whole lot more refined if it wasn't relying on engines that have been around since Adam was a lad.

You've got to love the way Seat describes the 1.2-litre three-cylinder engine as 'characterful' when in reality it's just plain noisy.

Sure, there's a certain delight from burying the throttle and listening to the little 68bhp engine thrumming away like a demented dishwasher, but that's a novelty that's likely to wear pretty thin on those lengthy trips to see your great auntie in the back of beyond.

The 83bhp 1.4-litre four-cylinder engine is equally long in the tooth and in a market where many 1.4s offer over 100bhp, it's not exactly a ball of fire.

That said, its smoother, brisker responses and quieter cruising abilities make it an altogether a better proposition than the 1.2 and it doesn't use much more fuel. Yes, it's likely to add 700 to the invoice - prices are yet to be released - but it's worth it.

The lack of meaningful punch is compounded by the 1.6-litre option, which generates just 103bhp, so the sportier FR and Cupra models that are due next year can't come a moment to soon.

Diesel is still a relatively rare breed in the supermini market and it's likely to remain so for Ibiza buyers.

The perennial 1.9-litre engine is certainly strong, and it'll easily return over 60mpg on average - but, boy, it's a gruff, clattery old lump. It's best avoided unless you do star-ship mileages.

However, salvation may well be at hand for reps getting their first foot on the company car ladder. The latest, smoother, quieter, high-pressure fuel-injection 2.0-litre diesel that has already appeared in other VW products will find its way into the Ibiza line up for 2009, as well as a new three-cylinder 1.4-litre diesel.

Specifications are yet to be finalised, but you can expect entry-level cars to have electronic stability control, front and side airbags, electric front windows, remote central locking, hill-holder control and an MP3 stereo.

Along with the latest platform, Seat has also gained access to VW's excellent seven-speed semi-automatic gearbox, which will be offered as an option and should prove a big hit with city drivers. There's also a host of big-car features to be offered as options.

Bi-xenon headlights which swivel to help you see around corners, rain-sensing wipers, rear parking sensors, hands-free Bluetooth phone connections, and USB sockets for music devices and sat-nav docking will all be available.