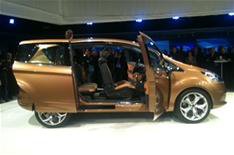 Ford's B-Max may wear a concept car tag at the Geneva motor show, but this is pretty much the car that'll go on sale in Spring of next year complete with pillar-less rear doors. Prices are expected to start at just over 13,000 not too far away from today's Ford Fusion, the car it replaces.

As the name suggests it's a smaller brother to the C-Max, and is a rival for the likes of the Vauxhall Meriva. At a shade over four meters in length, it's slightly longer than the Fiesta on which it's based, allowing for slightly more rear space and a larger boot. Ford is also saying the B-Max represents another step forward for interior quality, too.

The sliding rear doors make access to the cabin easy, especially in tight spaces such as car parks. It's a much better solution than the Merivas rearward-opening rear doors, which are more awkward in confined areas.

In spite of a lack of traditional B-pillar, Ford says it is confident the B-Max will achieve a full five star Euro NCAP crash rating: 'We wouldn't have done it otherwise,' said designer Stefan Lamm.

Extra strengthening in the door itself, in the floor and through the roof compensates for the lack of a B-pillar. The doors themselves will be easy enough to slide although they weigh more than standard doors. There are no plans to offer electric sliding doors, though.

A three-cylinder 1.0-litre Ecoboost petrol engine sits under the bonnet, and also features engine stop-start to further improve economy and emissions. We'd expect other engines from the Fiesta line-up to be offered, too.

The bold styling continues Fords kinetic design theme and features a striking front end with wraparound front lights, mimicked by the tail lights at the back, plus a powerful shoulder line and prominent lips on the wheelarches.

However, the arrival of the B-Max does not mean the end for the Fusion, initially at least its popularity in Eastern and Southern Europe means a stay of execution for a while.