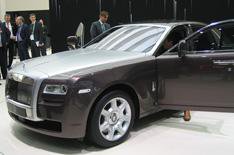 Big numbers
The Ghost might be the new baby of the Rolls-Royce range, but its still about a lot of very big numbers.

So, while its more than 600mm shorter than a Phantom at 5399mm, the Ghost is still longer, wider and taller than a Mercedes Benz S-Class.

Its got the most powerful Rolls-Royce engine ever a 563bhp 6.6-litre V12 thats capable of bringing the 2.5-tonne car to 155mph rather effortlessly via an eight-speed automatic gearbox.

The rear-hinged rear doors open to 83 degrees (thats very wide) for graceful entry and egress from the car.

Building a Ghost takes 60 people at least 20 days to do. Usual family runabouts are built in a matter of a few hours.

Small numbers
That big engine can accelerate the Ghost to 60mph in just 4.7 seconds, which is rather rapid, while fuel consumption is just 20.8mpg. That actually leads to another big number which is the CO2 output at 317g/km.

How much is it?
Thats another big number, hovering somewhere around the 200,000 mark.