* Coupe and Roadster concepts * To be built at Oxford factory * No production date yet... 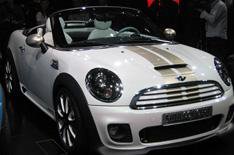 The two-seater Coupe concept and Roadster concept cars would give the BMW-owned British manufacturer a fifth and sixth model to add to the hatchback, Clubman, Convertible and the forthcoming SUV-like Crossover. Both will be built at the firm's Oxford factory.

Mini is reluctant to commit to a date when we can expect to see these cars in production - but it will be at least two years. Unlike other twins, these two won't necessarily go on sale at the same time.

They sit lower and squatter than any other current Mini, and feature big round headlamps with black reflectors, a hexagonal grille, deeper airdams, a rear spoiler and 18-inch wheels.

Power comes from the 211bhp 1.6-litre turbo engine from the current John Cooper Works Mini, while lightweight construction should ensure even livelier performance.

The cars both have a lockable rear bulkhead, allowing occupants to reach into the 250-litre boot without having to leave the car.

The Roadster has a manually operated soft top.