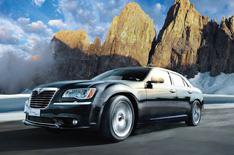 Lancia will show a four-wheel-drive version of the Thema at the Geneva motor show; the car that will be badged as the Chrysler 300C when it reaches the UK.

The car can automatically enable its four-wheel-drive system during colder periods, or when sensors detect rain or snow.

Four-wheel drive is then switched off when not required, which will improve fuel economy by up to 5%, according to Lancia.

However, it's not certain whether the UK-bound versions badged as the Chrysler 300C will come with the system. A UK spokesman said: Never say never. There is no reason why not, but it is yet to be confirmed.

Also at Geneva is the Lancia Ypsilon, which goes on sale this month, with prices from 12,750.

The manufacturer's display will also include a convertible version of the Lancia Flavia, which will not come to the UK .