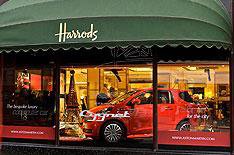 Swan has never been on the menu at the Harrods food hall, but you can now see a Cygnet at the world's most famous department store.

The Cygnet is powered by the iQ's 97bhp 1.3 litre engine.

Cosmetic changes over the standard iQ include new bumpers, light clusters and grille to give the car an Aston look. The leather-lined interior is also markedly different from the iQ's.

Order books for the Cygnet have already opened, with the car expected to cost around 30,000. Initially, existing Aston owners will have priority to buy the Cygnet, but Aston hopes to eventually sell between 1000 and 1500 a year.