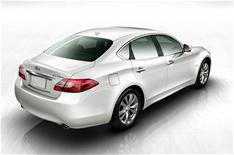 Infiniti has said that it will build a hybrid version of its M saloon car.

The M35 is the first hybrid in the Japanese brand's 20-year history, and Infiniti says it's designed to deliver 'driving flair' alongside fuel efficiency.

In certain driving conditions the car can run solely on electric power, but the motor will also boost the V6 when maximum acceleration is needed.

As well as generating power to charge the battery, the Infiniti will capture energy created during deceleration and braking.

Performance and range details for the hybrid will be announced nearer to its launch.

Infiniti's petrol and diesel M cars will go on sale in the UK in September 2010, rivalling large saloons such as the BMW 5 Series and Mercedes-Benz E-Class.

Your verdicts on the Infiniti M

Preview the Infiniti M with What Car?