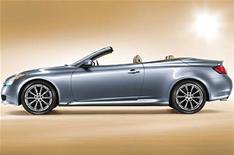 This is the first picture of the Infiniti G37 convertible, which may be sold in Britain.

So far, sales have been confirmed only for the US from early 2009, but Infiniti has confirmed it is evaluating the car for sale in Europe.

Based on the current G37 Coupe, the convertible is powered by a 316bhp V6 engine and uses a three-piece retractable hard top.

Infiniti sales will begin in Europe from October.