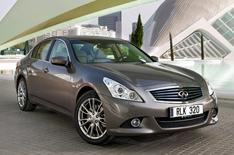 Infiniti is to give its G37 saloon a 'dynamic revamp', it has been announced.

Changes to the G37 include sharper front-end styling to give the Saloon a look that's closer to that of the sportier G37 Coupe.

New front light clusters which keep the standard bi-xenon cornering lights and a reworked version of the double-arch grille, make up the bulk of the front's styling updates. The G37's foglamps have been moved, from the main light cluster to a new recessed housing in a redesigned under-bumper section.

Three new colours will be available: Smokey Quartz, Graphite Shadow and Vibrant Red all making it onto the options list.

Inside job
Modifications to the cabin are subtle, with touches such as a new high-gloss finish for the Rosewood accents, and slightly lighter hues to the existing leather trims along with a new Wheat colour. The redesigned centre console is based on that in the EX37 and FX37.

Sound choice
There's also more multimedia functionality on the way, with Infiniti's Connectiviti system being introduced to the saloon for the first time. The hard disk-based system provides MP3-player and Bluetooth compatibility, along with a 30GB music store and integrated sat-nav.

Pricing and specification of the 2010 G37 saloon will be confirmed early next year, prior to sales beginning in the spring.