More for you |
Every 5-star car on What Car?Used test: Maserati Levante vs Porsche MacanNew issue of What Car? magazine on sale nowMost and least reliable small SUVsRevealed: the car makers whose discounts have got bigger since lockdown
Home
News
Infiniti: 'We're hitting sales targets'
news 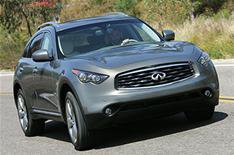 Luxury car maker Infiniti says it is hitting European sales targets despite the slump in all car sales.

The company, which is Nissan's upmarket brand, launched in Europe late last year, and is coming to Britain later this year.

Many predicted that the financial downturn would hit Infiniti hard, but a company insider has denied this.

Infiniti is reported to have sold just over 700 cars across Europe so far, with the FX50 SUV, powered by a 5.0-litre V8 petrol, the best-selling model.

'Our sales predictions for the first year were always very modest, and we're comfortably hitting them,' said the insider. 'We don't have any concerns until 2010, when we hope the arrival of diesel engines and our new M saloon will give us a significant boost.'

The M saloon will be a rival for the BMW 5 Series.