Is the Vauxhall Ampera 100% electric? 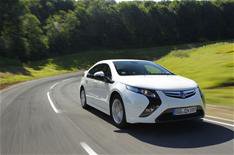 General Motors has revealed more details for the Vauxhall Ampera and Chevrolet Volt's powertain and attracted criticism that they're not 100% electrically driven as originally claimed.

The manufacturer had originally said the cars would be driven 100% electrically, 100% of the time. The 1.4-litre range-extending petrol engine would only be used to supply more power to a generator and would not drive the wheels themselves, it said.

Now, however, the company has now revealed that the internal combustion engine is used to help power the wheels in combination with the electric motor and generator at high motorway speeds. It says details of this have been withheld until now as it was waiting for patent approval.

Describing the operation of the powertrain, GM's executive director for hybrid and powertrain engineering Larry Nitz said: 'It leads with the battery and follows with the engine. We always lean on the battery for great spirited driving - the engine helping in the background. There is mechanical power coupled, but it's indirectly.'

Critics have suggested this means the Ampera is more of a plug-in hybrid than a range-extended electric car, but Nitz doesn't agree.

He says that although power from the petrol engine is used to help drive the wheels, it isn't direct since there's no clutch between the engine and the planetary gear the company is using to mix the various power sources of the car. The car cannot operate without the electric motor and generator.

Other details
The all-electric range of the Ampera is now given as between 25 and 50 miles, depending on use, rather than the 40 miles previously stated.

Drivers will be able to select a range of driving modes including normal, sport, mountain with greater input from the battery to help the Ampera climb hills and low shift for speed control and greater battery regeneration on descents.

In anticipation of possible future electric car or zero-emission zones in cities, there's also a hold mode which preserves battery power and give owners the choice of when to enter full-electric running.

Whether you think of the Ampera as a plug-in hybrid or an electric vehicle, it should still receive the 5000 grant the Government is offering as part of its push on low-carbon vehicles.