More for you |
How to spec a Peugeot 5008Can I get scrappage and Target Price discounts?Most and least reliable family SUVsThe most reliable family cars on sale - and the least2020 Toyota Hilux revealed: price, specs and release date
Home
News
Kahn Range Rover Evoque RS250 review
news 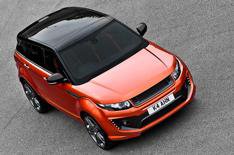 At 59,875, the Kahn costs nearly 20,000 more than the range-topping Prestige spec Evoque. For the extra cash, among many other additions, you get 22-inch matt grey alloy wheels, sports suspension lowered by 30mm, a second exterior spoiler, and an interior swathed in orange and black Alcantara and leather, with copper detailing.

What's the 2012 Kahn Range Rover Evoque like to drive?
Fitting 22-inch wheels and lowered suspension to any car will affect its ride, so it's hardly surprising that the Kahn Evoque feels unsettled around town.

Grip and body control are actually better than they are in the standard car. However, the Kahn still feels too heavy to be termed agile, even if its steering is well weighted and accurate.

The engine has been left untouched; it's the same 2.2-litre diesel that youll find in the regular SD4 Evoque. This means it produces 187bhp, while managing 49.6mpg and emitting 149g/km of CO2.

Performance feels strong, and the engine picks up eagerly from low revs. What's more, it's doing only around 2000rpm at the national limit, so noise isn't intrusive.

Engine is unchanged, but the Kahn Evoque gets lowered suspension and 22-inch alloy wheels

Sadly, both the standard Evoque and the Kahn car have large door mirrors that generate quite a bit of wind noise, and the Kahn is worse for road noise due to its bigger wheels.

What's the 2012 Kahn Range Rover Evoque like inside?
Despite extensive cabin revisions, Kahn hasnt changed the driver environment beyond all recognition.

You get the same high driving position and fantastic forward view, although rear vision is still compromised by the small rear window.

You'll also find the same touch-screen infotainment system, which is easy to reach but slow to respond and complex to use.

Being the five-door model, space is good. Access to the rear is still tight, but theres room for four adults and the standard panoramic sunroof keeps things well lit.

There's nothing standard about the interior trim, though. The Vesuvius Copper gets a carbonfibre centre console, seats covered in the company's trademark quilted leather, and copper-coloured instruments. The quilted trim continues on the door inserts and glovebox, and Kahn has added diamond details on the gear selector dial.

Should I buy one?
The standard Range Rover Evoque does style and desirability extremely well; the long waiting list is testament to that.

For some, it isn't enough, and Kahn Design is ready to meet that niche demand. The company has already sold around 30 Vesuvius Copper Evoques and believes it can sell almost as many again before the year is out.

This isn't a car the majority will like, or understand, but there is a market for it. Those looking for exclusivity won't be disappointed.

For our money, the standard Evoque looks great, drives well enough and has interior options to suit the majority of tastes. The 20,000 premium that Kahn demands might buy you exclusivity, but it ultimately represents poor value for money.