* Initially for American market * European version likely in 2013 * Refinement needs to be improved... 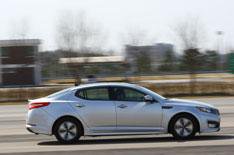 A petrol-electric version of Kia's medium saloon that will soon replace the Magentis. It pairs the Hyundai-Kia 2.4-litre petrol engine with a 40bhp electric motor delivering a combined 206bhp and 195lb ft of torque in hybrid mode. Unusually for a hybrid, the engine and motor drive through a six-speed full automatic transmission.

When can I get it?

You won't be able to because it hasn't been created with Europe in mind. The 2.4-litre engine has been optimised to deliver good economy for Americans (37mpg on the US highway cycle) rather than the low CO2 required in Europe. We'll still be better off with our diesels.

Some of the switches between electric- or petrol-only running to full hybrid operation are lazy and jerky, so they will need improving for any future hybrid, especially with refinement-conscious Europeans in mind. The current Optima hybrid can also do less than a mile on battery power alone, which is nowhere near enough.

Not entirely. Kia is also preparing a hybrid for launch in 2012, featuring a 2.0-litre turbocharged petrol engine and an electric motor. It will primarily be for the Korean market, but will come to Europe in 2013.

What's good about it?
The new 274bhp 2.0-litre turbo engine already feels as strong as the 2.4 hybrid and a fair bit smoother and less raucous when being stretched, so we can only imagine what it will be like with an electric motor to boost low-speed torque and mid-range acceleration. Depending on how it's priced compared with the Optima diesel, it might make a few people think.

Hybrids are coming in greater numbers, whether you like the idea or not, because they help bring down the average CO2 of a manufacturer's model range. Before you dismiss them out of hand, have a look at their whole-life operating costs compared with a diesel. The way things are going, the choice might not be clear-cut.