More for you |
Used Ford Fiesta long-term test reviewWhat can I do about a security issue on my car? Best cars for less than £250 per monthWhy is my new car’s fuel economy so poor?Top 10 used electric cars
Home
News
Land Rover DC100 and DC 100 Sport
news 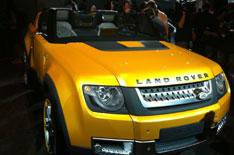 The Land Rover has launched two concept cars at the Frankfurt motor show the Land Rover DC100 and, the surprise of the day, the DC100 Sport an open-top Defender.

Land Rover has confirmed that a new Defender model will be launched in 2015 and this is the first indication of how it could look.

'This isn't a production-ready concept,' said Land Rover director of design Gerry McGovern. 'It's the beginning of a four-year journey to design a Defender for the 21st century.'

Land Rover says it wants to 'engage with existing and potential customers to help us finalise the details of the new vehicle'.

The cars include a Terrain-I scanning device to warn of obstacles when off-road and Wade Aid sonar technology to assess water depth.

The concept cars' name is suitably uncomplicated - D stands for Defender, C stands for Concept and 100 refers to the car's wheelbase. The current Defender comes in wheelbase sizes - 90, 110 or 130.