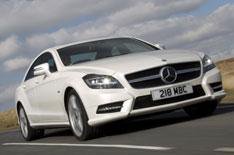 The Mercedes-Benz CLS is so good with a V6 diesel installed that it would be easy to overlook the four-cylinder 250 CDI. Especially when they are surprisingly close on price.

That would be a mistake, because you'd be missing the chance to own what's arguably the best version of the E-Class's sleeker, sportier sister. You'd also lose out on substantial savings on running costs.

As well as a healthy 3000 saving on the list price, going for the CLS250 CDI over the bigger diesel will also mean you'll squeeze around 10 miles more from a gallon and enjoy substantial tax savings if you're getting it through the company.

All good arguments, but will you be wishing you're spending the extra when you're behind the wheel?

Not at all. It doesn't sound quite as creamy at low speeds as the 350, but this disappears when it's warmed through and up to speed.

What's more, its 202bhp and 369lb ft of torque provides plenty of urge when you want to get up to cruising speeds or overtake. The standard seven-speed auto 'box remains unruffled whatever demands you place on it.

Like every CLS the 250 feels more agile than the equivalent E-Class, although it's hardly what you'd call sporty. Still, the trade-off is a ride quality that's resolutely supple at every speed.

The 250 CDi feels glamorous inside the well-trimmed and snugly comfortable four-seat cabin, but what it really proves is that luxury and refinement don't have to start with six cylinders.