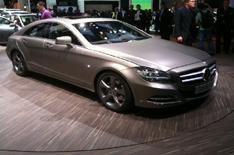 One of the highlights on the Mercedes stand is this, the new CLS.

Due to go on sale in the UK in March 2011, this second-generation four-door coupe draws much of its styling from the new SLS supercar. According to professor Gorden Wagener, head of design at Mercedes-Benz, it also points the way forward for the future design of Mercedes-Benz.

If this car is anything to go by, then Merc buyers in the future will need to like LED lights you can get 71 of them on the new CLS, including full LED headlights.

Mercedes says the LED lights not only give the CLS an unmistakable appearance, they also provide a 'significantly enhanced view of the road'.

Among the changes are the introduction of the new V6 and V8 engines that are available in the updated CL coupe. Also included in the engine line-up will be a new V6 diesel that'll appear in the E-Class later this year, and a new four-cylinder diesel. There will be a hot AMG version, too.

Merc is also keen to stress how easy it is to personalise the CLS. Its four-seat interior will be available in five colours and five trim designs, while buyers can even choose between three grades of leather and three types of wood trim.