If you're in a stretched, pink Hummer, bystanders will assume (probably correctly) that you're on a hen-do. Sit behind the wheel of a luxury limousine and you're potentially pigeonholed as an airport-bound taxi driver, fetching the CEO of an international business. Which is perhaps one of the biggest reasons to think laterally when it comes to luxury and buy a four or five-door coupé instead, like the Audi A7 Sportback.

Yes, the traditional chauffeur’s choice of Audi A8, BMW 7 Series or Mercedes S-Class might all be spacious, luxurious and unbelievably high tech, but play it rather safe on the style front. The A7, meanwhile, will appeal to those looking for limo-like luxury with an injection of distinctive style, and Audi has put it on a more premium footing than ever before.

The current A7 has a sumptuous interior that looks and feels like it was lifted straight out of its larger A8 sibling, including Audi’s latest dual-screen infotainment system. What’s more, just like the A8, the A7 Sportback’s engines make use of 48-volt mild-hybrid technology, which allows emission-free coasting, energy recuperation under braking, more responsive performance and a smarter stop-start system.

That’s all great news, but the A7 is not alone, of course. The Mercedes CLS also cuts a premium dash, while BMW has taken its 6 Series Gran Turismo upmarket as well — although admittedly that car still trades more on function over style.

The fastest version is the S7, which you can read about in detail by clicking the link to our dedicated review, but read on through this review for the low down on how the regular A7 drives, what it’s like for passengers and which trim makes the most financial sense. And if you fancy buying one, don't forget to check out our New Car Buying pages to see how much you could save. 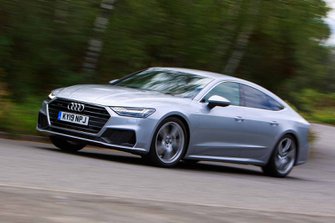 Great to sit in and impressive on the safety front...

The Infiniti Q50 packs a high-tech and surprisingly stylish pu...