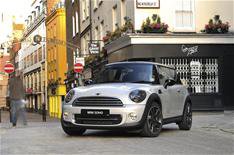 Mini has launched a Soho special-edition of its hatchback and Convertible.

The Mini Soho is on sale now and will be available until March 2012. The cars have exclusive White Silver metallic paint.

Both hatchback and Convertible models are available in Cooper or Cooper D form, so theres a choice of a 1.6-litre petrol or diesel engine.