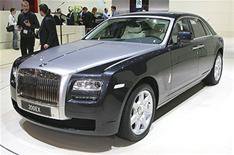 Rolls-Royce has released more details of its next saloon, a production version of the 200EX concept car revealed at the Geneva motor show in March.

The new car codenamed RR4 will have a new turbocharged 6.6-litre V12 engine producing more than 500bhp, linked to an eight-speed automatic gearbox.

Rolls-Royce says that fuel efficiency and CO2 emissions will be 'significantly improved' over its Phantom models, but owners can expect to pay the highest rate of company car tax.

Production of the new model is expected to start in 2010 at the company's Goodwood factory in West Sussex. Prices have yet to be confirmed.