Citroёn Ami electric 'car' can travel up to 46 miles between charges, and is even available as a van... Everyone loves a bargain, and the new Citroёn Ami is shaping up to be exactly that – at £7695, or £19.99 per month on PCP finance, it will one of the cheapest forms of electric transport in the UK when sales begin later this year. It’s available in two versions: one that's capable of carrying two people, and the other a single-seat ‘van’ called the My Ami Cargo.

The Ami isn't technically a car at all – instead, it's classed as an electric quadricycle in the same vein as the Renault Twizy, although that model is not currently on sale, leaving the Ami with precious few rivals.

The passenger version is available in three trim levels, dubbed Ami, Ami Pop and Ami Vibe. As standard, the Ami offers a digital instrument display, LED front and rear lights, a panoramic glass roof and a single USB charging port. The charging cable is integrated into the door panel and a Type 2 socket adapter is provided.

The Ami takes about three hours to completely recharge its 5.5kWh battery. According to official figures, this yields a range of 46 miles between recharges. However, it’s worth noting that this figure was achieved under the World Motorcycle Test Cycle (WMTC) standard, and not the WLTP cycle used for conventional cars like the Volkswagen e-Up.

You also get an 8bhp motor and a top speed limited to 28mph – a quirk of the Ami’s French roots, where it can be driven by 14-year-olds without a licence. No such legal exception applies in the UK, so you’ll need a full driving licence.

All Amis are finished in flat grey, but three colour packs (orange, blue or grey) are available for £400, which add contrasting details to the exterior and interior. These include colour-coded storage boxes and bag hooks on the dashboard, colour-coded wheel trims and more. 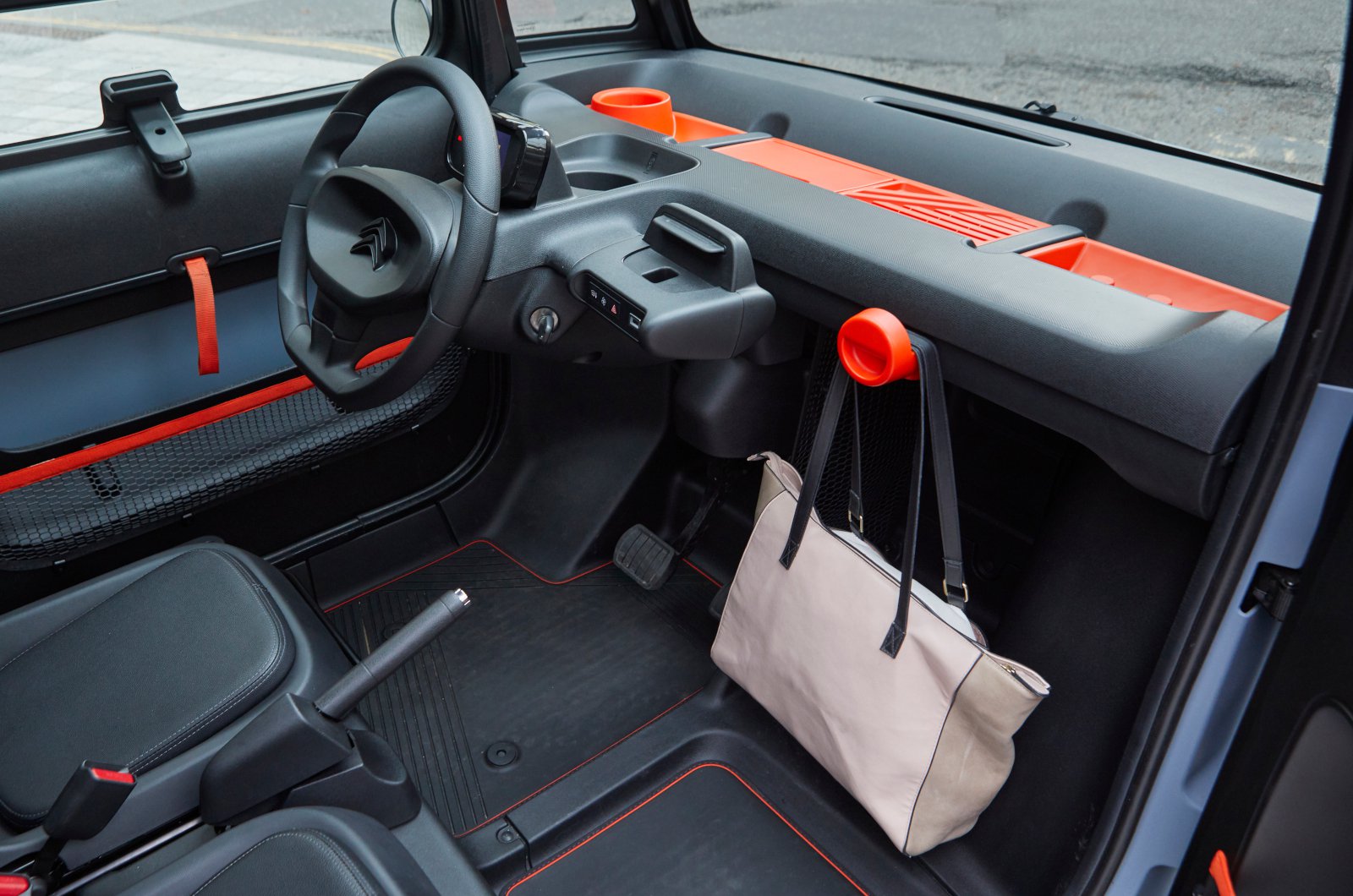 Also included are a phone cradle on the dashboard – required to use navigation apps following changes to the law – and access to an app that allows you to check your Ami’s charge level.

The Ami Pop (£8495) and Ami Vibe (£8895) trims include the aforementioned colour packs, plus various styling changes. The Ami Pop (pictured) introduces sportier styling, adding a rear spoiler, black trim around the bumpers and racing-inspired ‘2’ stickers on the doors. The Ami Vibe also adds black details around the bumpers and wheel arches, plus two (decorative) roof rails.

The My Ami Cargo, aimed at last-mile delivery services, costs £7995. Inside, you’ll find a seven-part storage space in place of the passenger seat with room for 260 litres (or 140kg) of goods plus a 140-litre boot, giving a total capacity of 400 litres. 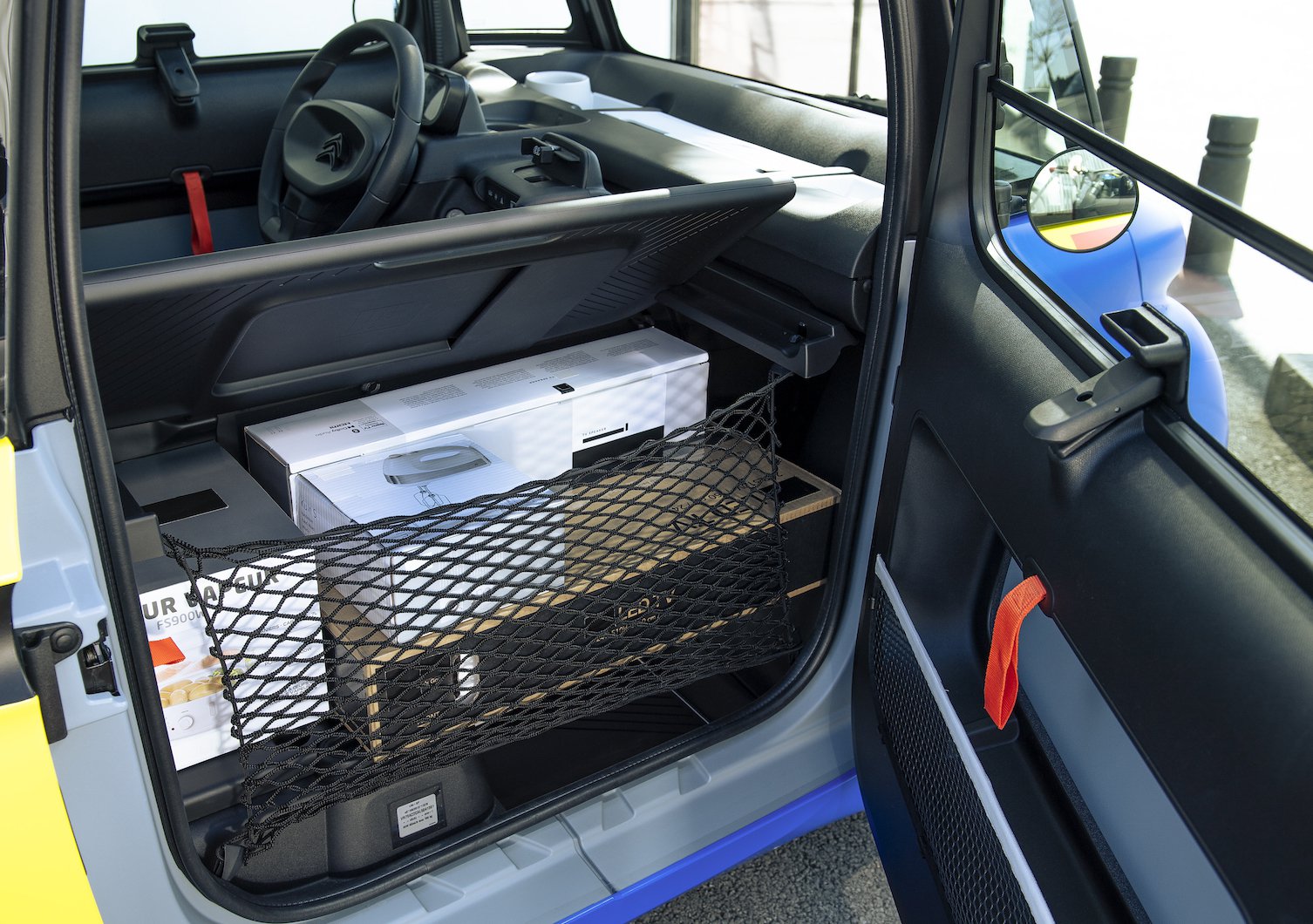 You can finance an Ami from £19.99 per month on a 24-month PCP agreement with a £2369 deposit and a maximum annual mileage of 5000. Once your contract is finished, you'll be able to pay an optional final payment of £5594 to purchase your Ami outright.

All UK-bound Amis are left-hand drive, so we’d recommend testing one first to see if you can deal with this quirk.

The Ami will be sold online only, in similar fashion to the recently announced Citroёn C3 You, which represents the step above the Ami in the French brand’s line-up at £12,995. You can reserve an Ami by placing a £250 (refundable) deposit on Citroёn’s website.