When is a car not a car? When it’s a quadricyle. Think of the Twizy as somewhere between a car and a motorcycle, or a milk float and a Zoe, maybe. It’s tiny, for one, about a foot shorter than a Smart ForTwo, and looks like no other car you’ve ever seen. It seats two in tandem-style, one behind the other, and is propelled by a 17bhp electric motor that drives the rear wheels. It is a zero emissions vehicle, so bang on-trend. It has doors, after a fashion, but they’re an option. Ditto the windows, which, like the doors, don’t do much to keep out inclement weather anyway.

Hop in, through the scissor doors (if fitted) that rise up and out of your way like a supercar’s, and you’ll be surprised to find a quite conventional driving position, with a normal steering wheel and even some familiar instruments. The seat can slide back a little, but that’s about the limit of adjustability. There’s a lot of hard plastics, which, as it might get quite wet in there, is probably advisable.

Driving the Twizy is a doddle: hit the button marked D, release the handbrake and you’re off. Acceleration feels initially brisk, as in most electric cars, but soon tails off. Top speed is a mere 50mph. The range is quoted as 43 miles on a full charge. The steering responds well, and the Twizy feels agile, pert even. Its levels of grip on its skinny tyres is fairly limited, but you’re unlikely to run into great difficulties with it, and it handles reasonably safely, ploughing straight on in corners taken at far too much speed.

Alas what lets it down dynamically on the road is the quality of its ride, which is close to abysmal. Hit minor irregularities and you’ll see and hear them and feel them; hit a large pothole or a speed hump and it’ll feel like the whole suspension is made of concrete, so stiff and unpleasant is it.

It has the further added benefit of being cheap to buy, and cheap to run. However, you need to consider that once you’ve bought your Twizy you will also have to lease the battery, which will be an additional monthly cost. You should also bear in mind the car’s two-star Euro NCAP safety rating. 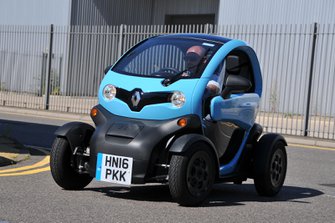