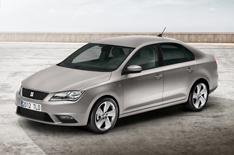 This is the all-new Seat Toledo, which goes on sale in spring 2013.

The new Toledo is a sister car to the Skoda Rapid the two share most interior, exterior and mechanical parts. These are the first pictures of the production Toledo, which is all but identical to the concept car revealed at the 2012 Geneva motor show. The addition of body-mounted indicator repeaters, different door mirrors and more body-coloured exterior trim are the only exterior changes from the concept car.

Different bumpers, lights, tailgate and bonnet distinguish the Rapid and Toledo. As with the Rapid, the Toledo has a conventional hatchback tailgate, despite its saloon-like styling.

At 448cm, the Toledo is around 12cm longer than a Ford Focus and 30cm shorter than a Ford Mondeo. The Seats high bootline means it has a huge loadbay: official figures are yet to be released, but Seat has said the capacity will be more than 500 litres, which puts it close to the Mondeo's 528 litres. The VW Golf, by comparison, has a 350-litre boot.

The Seat Toledo is virtually identical to its sister car, the Skoda Rapid

Full technical details haven't been released, but Seat says the Toledo will be available with the option of 1.2- and 1.4-litre petrol engines, or a 1.6-litre diesel. The entry-level version will have a 74bhp 1.2 TSI petrol engine, while the 1.4 TSI petrol develops 121bhp.

Specifications haven't been released, but Seat has confirmed that entry-level models will have a split/folding rear seat and electric front windows. Prices are yet to be revealed, but the Toledo is likely to cost roughly the same as the Rapid, so a starting price of around 13,000 is likely.

The Toledo will sit between the Ibizaand Leon in the Seat range and will cost considerably less than the Seat Exeo.

An all-new Seat Leon is also due in 2013; more details will be released next month.

Prices haven't been confirmed, but the Toledo is likely to cost from around 13,000

Deal of the Day: Seat Toledo