More for you |
What are my rights with a faulty used car? Half of motorists don’t check their car before taking it on holiday2012 Peugeot 107 ReviewUpdated Peugeot 107 unveiledFace-lifted Peugeot 107 pictured
Home
News
Next Peugeot 107 coming in 2014
news 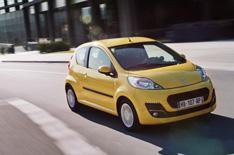 An all-new Peugeot 107 will be plusher and have more personalisation options than the existing model, when it goes on sale in 2014.

Company boss Maxime Picat revealed that he wants the next 107 to become 'more upmarket' in line with the 208 supermini and forthcoming 308 hatchback.

A far greater range of colour and trim options are also planned.

Picat also revealed that, like the current model, the next-generation 107 will be a joint venture between parent company PSA and Toyota meaning it will also spawn the next Aygo and Citroen C1.

He said: 'We see no reason to stop the co-operation, but we want to have more differentiation in design than before.'

The next 107 is likely to adopt a sportier look, but have slightly more cabin and luggage space than the current car. Previous reports have also suggested that it will continue to be available in both three- and five-door format.

It is expected to be powered by a reworked version of its Toyota-sourced 1.0-litre three-cylinder engine, tuned to provide more performance and superior economy.