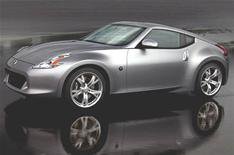 Nissan has released pictures of the new 370Z coupe ahead of its public debut at the LA motor show in California next month.

The new 370Z has a lot in common with the G37 Coupe that also arrives next year from Nissan's upmarket Infiniti brand.

Based on the same platform as the G37, the 370Z will get the option of the same seven-speed automatic and a six-speed manual.

Unlike the Infiniti, however, the new Nissan won't be a 2+2 coupe, but will stick with a two-seater layout. It goes on sale early next year for an estimated 28,000.

A roadster version of the car, perhaps with a metal roof such as the one recently shown on the newly unveiled G37 Convertible, should arrive around a year after the coupe.