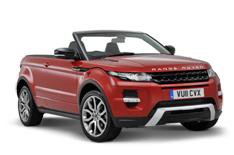 Range Rover is planning a host of new small cars following the success of the new Evoque.

Sources at the highest level have revealed to What Car? that bosses are likely to give the green light to a radical Evoque cabrio and an even smaller Range Rover designed to compete with the Mini Countryman and forthcoming Audi Q1.

The Evoque open-top will come first though, likely within the next three years. It will be based on the three-door Coupe model and will have a fabric roof rather than a folding metal hood.

Design sources say that it's easy to package a folding roof into the rear of the Range Rover and that the design lends itself to removing the roof. The company's top engineers say that they are unlikely to have to make major changes to stiffen the body to compensate, and that an Evoque soft-top will provide a formidable rival to the likes of the Audi TT Roadster and BMW 3-series Cabrio.

The smaller model is still some years away, but sources have revealed that it will have both three and five doors and will be a full five-seater. It will also be powered by smaller-capacity engines than the Evoque, perhaps 1.6-litre petrol and diesel engines, and could also be a showcase for other technologies such as hybrid and full electric.

The new baby Range Rover will have to be made on an all-new platform however which could be shared with other Land Rovers, or even Tata models. Our insider also admitted that, like the Evoque, a baby Range Rover would not be a cheap car.