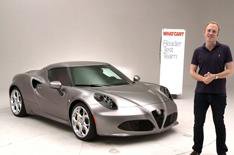 The Alfa Romeo 4C is one of the most eagerly anticipated cars of 2013 it started the year by winning the What Car? Reader Award, which is chosen by whatcar.com users.

Alfa's 52,000 Launch Edition versions of the 4C have all sold out, but the standard car is expected to cost from less than 50,000.

The 4C makes its official UK debut at this week's Goodwood Festival of Speed, but What Car? readers have already had the chance to check it out in the metal. Watch the video below to see what they thought of it.