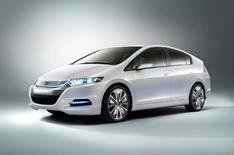 These are the first images of the new Honda Insight, which will go on sale next spring.

The Insight is a petrol-electric car that will be launched simultaneously in Europe, the USA and Japan.

Called Insight the name Honda used for its two-seater hybrid coup of 1999 it will be displayed as a concept car at the Paris motor show next month. The real thing will be unveiled at Detroit in January.

It uses a similar drive system to the Civic IMA, with an electric motor for low-speed town work and a petrol engine to take over at other times.

It is based on an all-new platform and styled to look like the CRX Clarity hydrogen fuel-cell car available for lease in California.

Honda says that by using its 20 years' experience with hybrids it has been able to make many of the Insight's components lighter, smaller and cheaper.

That will allow it to go on sale at 'thousands less' than the 17,000 Civic IMA. Estimates suggest prices will start from 14,000.

What is perhaps surprising is that Honda is making the car only as a five-door hatchback American buyers who will make up a major portion of the customer base, as well as those in Japan, much prefer four-door saloons.

Three more hybrids the sporty CR-Z, a replacement Civic IMA and a Jazz will be added in the next few years, taking Honda's annual petrol-electric car production up to half a million.