* Emissions fall under 100g/km for 2012 model * Tweaked engine, suspension and exterior design * Car will be unveiled at Frankfurt motor show... 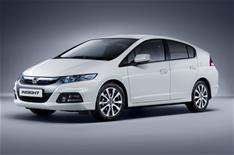 Honda has pulled the wraps off an updated Insight, which is due to go on sale early next year

The petrol electric hybrid car will be launched at the Frankfurt motor show later this month. Crucially, its carbon dioxide emissions will fall below 100g/km to 96g/km.

This means the Insight will fall into the lowest VED tax band, so owners won't pay road tax. It is also exempt from London's Congestion Charge.

The improvement in emissions comes thanks to changes in the CVT gearbox and a more efficient air-conditioning system.

Other changes include a new front grille, and a slimmer rear spoiler that will improve visibility, says Honda.

Honda also claims that adjustments to the car's suspension will improve the ride, while interior quality is also said to be enhanced.

There's no official word on prices yet, but we're not expecting much of an increase from the current starting price of 16,895.