* Five show disappointments * What left us feeling let down? * See the pictures... 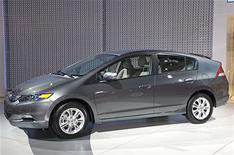 It isn't the car that's the disappointment, rather the manner in which it was presented to the world.

Instead of an eye-catching launch to capture the imagination, budgetary restraints meant the Insight was simply plonked on a stand.

That was a real shame, as people should be excited by the car, both because of its fuel economy and an asking price that redefines the hybrid market.

The car uses the same hybrid powertrain as the Honda Civic IMA: a 87bhp 1.3-litre petrol engine, with an electric motor that generates 13bhp. The powertrain is then mated to a continuously variable transmission.

The Insight also has a set of batteries to store energy that is generated under braking, which subsequently provides power for the electric motor.

Average fuel consumption is expected to be rated at 64.2mpg, while carbon dioxide emissions are 101g/km.

If confirmed, these figures compare favourably with the Civic IMA's 61.41mpg and the rival Toyota Prius hybrid's 65.69mpg.

The Honda Insight hybrid will go on sale here in April, when it is expected to significantly undercut the rival Toyota Prius, with prices starting at around 15,000.