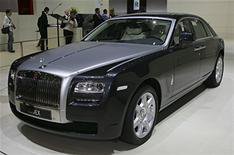 Rolls-Royce will create more than 150 new jobs at its headquarters in Goodwood, West Sussex, to help build its new Ghost saloon.

Most of the new positions will be in the wood, leather and paint shops and the assembly areas, but there will also be new jobs in the headquarter offices. Rolls-Royce says that by the end of 2009 it will have created almost 400 new jobs in under two years, bringing the total number of employees based at Goodwood to 900.

Rolls-Royce CEO Tom Purves said: 'This is good news for the British car industry at a time when it is struggling. Our new model, the Ghost, has enjoyed an extremely positive international response and we now need to put people in place to bring the car to the market.'

Production of the Ghost will begin in the autumn, with customer deliveries scheduled to start from early 2010.

Full details of the car have yet to be revealed, but we know that it will have a 6.6-litre V12 petrol engine producing more than 500bhp and will closely resemble Rolls Royce's 200 EX concept car.