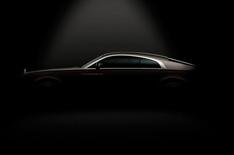 This is the Rolls-Royce Wraith, which will be revealed in full at the Geneva motor show later today.

The single image released shows the profile of the car in heavy shadow - it appears to have a more sloping roofline than the Ghost, and thick chrome window surround.

Rolls-Royce has confirmed the Wraith will be its most powerful model yet. It's a two-door coupe version of the Ghost saloon and provides Rolls-Royce with a more expensive rival to the likes of the Bentley Continental GT. It will go on sale towards the end of this year.

Few technical details have been released, but it's thought the Wraith will be powered by a 600bhp, 6.6-litre V12 engine.

'This exceptional new car will build on the finest principles of Rolls-Royce's forefathers the world's best engineering, the employment of cutting-edge technology and peerless craftsmanship,' said Rolls-Royce chairman Harald Kruger.

Rolls-Royce will reveal more information about the Wraith next month, ahead of its launch at the Geneva motor show on March 5. Wraith prices have yet to be announced, but we'd expect it to cost in excess of 220,000.