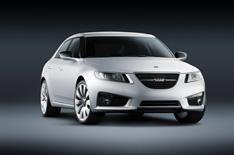 This is the best look yet at the long-awaited, all-new Saab 9-5.

The current 9-5 is an updated version of a car that was originally launched in 1997, so its replacement is long overdue. The all-new model promises a big improvement in practicality and refinement and will come with lots of high-tech features.

Classic Saab design
As our pictures show, the new 9-5 has a number of classic Saab design cues, such as the black front windscreen pillars and the distinctive curve of the rear pillars. The interior also has the driver-focused emphasis that Saab is renowned for, but the overall look is new and forward-looking.

Underneath, the 9-5 uses a version of the same platform as the Vauxhall Insignia. It also uses versions of the same turbocharged engines.

One diesel option will be available from launch a 158bhp 2.0 with CO2 emissions of 138g/km.

High-tech kit
The new 9-5 will be available with a range of high-tech equipment , including adaptive headlights, adaptive cruise control and a head-up display.

Entertainment options include a Harman Kardon audio system, a touchscreen satellite-navigation system with eight-inch screen and hard disk storage for 10GB of MP3 music files. A rear-seat entertainment pack with separate controls and wireless headphones will also be available.

On sale in spring
Saab has confirmed that the 9-5 saloon will go on sale in the UK next year, probably in April. Prices haven't been announced, but we expect it to undercut key rivals such as the Audi A6 and BMW 5 Series, so expect a starting price of around 23,500.

More details will be available when the car makes its public debut at the Frankfurt motor show in September.

As part of the proposed deal, GM will continue to provide Saab with technology for a defined period. As well as the new 9-5, products in the pipeline include a crossover SUV called the 9-4X and the next 9-3 compact executive. These are expected to use GM components, because the programmes were started several years ago.