Saab's vision of the future 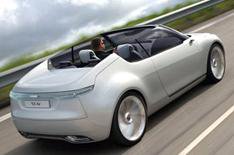 This is the Saab 9-X Air concept, which hints at how the new 9-3 Cabriolet will look, as well as giving clues to Saab's mooted VW Golf rival if it's put into production in 2010.

The concept car is a convertible version of the 9-X BioHybrid that was shown at the Geneva motor show earlier this year.

Once down, a screen rises so the driver is surrounded by glass, offering ideal visibility but avoiding any wind buffeting.

Saab has called this system 'Canopy Top'. Underlining how likely this is to make production, this radical design has already been patented by Saab.

The boot space is an even more radical design but is less likely to make it to production. Instead of being accessed by a lid, it slides out from underneath the rear lights. It's spring-loaded and slides on rollers, and is large enough to carry two golf bags.

Behind the wheel
The Saab 9-X Air concept is powered by a turbocharged 196bhp 1.4-litre engine that uses biofuel and hybrid technology to reduce emissions. It accelerates from 0-62mph in 8.1secs and emits 107g/km of CO2.

The cabin features a wraparound dash that extends to the top of the driver's door moulding and includes five embedded display screens.