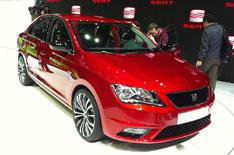 The new Toledo is a brave car from Seat, and also a potentially clever one. By teaming up with Skoda which has its own similarly sized model, called Rapid Seat has been able to access development of a cheaper chassis used by the VW Group in India.

That means two things: the Toledo is big, and it ought to be cheap.

Theres certainly no shortage of space inside the cabin; we sneaked into the back seat and discovered that even six-footers will have no problems with leg- or headroom. The boot is massive, too at more than 500 litres with the seats up, its on a par with those in the Ford Mondeo and Vauxhall Insignia hatchbacks.

Seat sources say the new Toledo will cost from around Leon money, which is likely to mean a starting price of around 13,500. Well want to try it on the road, of course and its worth remembering that its engine line-up isnt likely to include anything larger than a 1.4 at most, so were not expecting a rapid drive.

Thats not what the Toledo is about, though. Seat has said this car will offer huge space for a relatively small amount of money, and in that respect, it looks right on track.