More for you |
What can we do about our faulty Ford?2015 Ford C-Max: full pricing and specsDeal of the day: Ford C-Max2014 Mercedes B180 CDI Eco review2013 Ford C-Max 1.0 Ecoboost 100 review
Home
News
Seven-seat Ford C-Max photos leaked
news 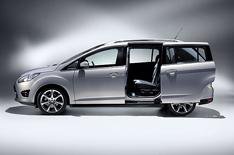 Photos of Ford's new seven-seat C-Max have leaked on to the web ahead of the car's official launch at the Frankfurt motor show next week.

The photographs show that, unlike the five-seater, the Grand C-Max has sliding rear doors. It is also longer and doesn't have such a sloping rear roofline, but otherwise the styling remains similar.

When Ford revealed the five-seater, images of the interior weren't published, although the Grand C-Max pictures show the dashboard and middle row of seats.

Come back at 10am on Tuesday, 15 September for the low-down on the car.