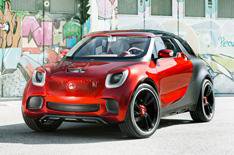 This is the Smart Forstars concept car, which has been revealed at the 2012 Paris motor show.

The electric two-seat coupe is charged via a domestic socket and uses the same 80bhp electric motor as the new Smart Brabus Electric Drive. That means 100lb ft of torque and a top speed of 80mph.

The Forstars name is a reference to its transparent glass roof and the video projector located in the bonnet that allows for a cinematic experience anywhere there's a blank surface.

An iPhone can be used to control the heating, projector and media controls, even from outside the car. A smartphone replaces the rear-view mirror, displaying whats going on behind via a rear video camera.

Despite its compact size, the Smart Forstars offers decent space for two passengers and their luggage

Despite its compact dimensions (3.5m long, 1.5m wide), the Forstars offers good cabin space and generous luggage space behind its seats, according to Smart.

Although a production version of the Forstars is unlikely, it previews styling and technology that's likely to be used in the next Smart Fortwo, which is due in 2014.

The Forstars could also showcase elements of the new four-seater Forfour model, also due in 2014. The new Forfour will be co-developed with Renault, as part of the alliance between Daimler and Renault-Nissan.