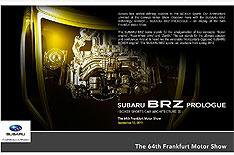 Subaru has named its forthcoming sports car the BRZ.

The company says B stands for 'Boxer', Subaru's lightweight, horizontally opposed engine where the pistons lie flat, punching out like boxers.

A concept car called the BRZ Prologue will be unveiled at the Frankfurt motor show next month.

The BRZ is being jointly developed with Toyota. We'll find out what Toyota will call its version when the car is unveiled at the Tokyo motor show in December.

Subaru will start making the production BRZ in spring next year.