More for you |
True MPG: most and least efficient cars revealedConfessions of an AA technicianUsed BMW i3 vs VW e-GolfHow to spec a Jaguar XENew issue of What Car? magazine on sale now
Home
News
The beast it's Obama's new Cadillac
news

The beast it's Obama's new Cadillac

* Car is known as 'The Beast' * Has eight-inch thick doors * Manages just eight miles to the gallon... 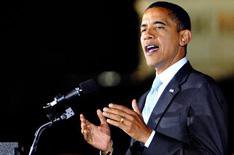 Details of President-elect Barak Obama's new official car have been revealed and why it's been christened 'The Beast'.

Its official title is Cadillac One, but Obama's new custom-built limousine earns its nickname of 'The Beast' with a host of hi-tech security modifications to protect the world's most influential figure.

Obama will first use the car when he travels along Pennsylvania Avenue in Washington after his inauguration, but beneath the sleek exterior of the Cadillac, the new President will be protected by some extreme modifications, including:

However, the Daily Mail report reveals that all the safety and defence measures do have some serious downsides: the car costs 300,000, can muster a top speed of only 60mph and manages just eight miles to the gallon.