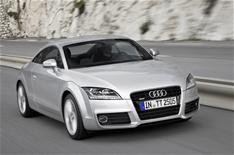 Another week; another new Audi. The company's model refreshment programme leaves barely enough time to absorb one set of changes before another batch comes along. Even those cars that still seem new aren't immune.

Who'd have thought the current Audi TT is four years old and ready for updating? Yet Audi is introducing subtle changes to the exterior styling and interior trim, tweaks to improve the 2.0-litre TDI diesel engine and a seven-speed semi-auto DSG gearbox option for the range-topping TT RS.

All TTs also get a brake energy recovery system to increase efficiency, and a programme within the trip computer to help drivers keep a watch on fuel economy.

The highlight, though, is the upgraded 2.0-litre TFSI turbocharged petrol engine, which has been so extensively revised that Audi reckons it's fair to call it new. The result is an 11bhp gain in power to 208bhp, maximum torque of 258lb ft matching the 2.0 turbo diesel and sharper performance all round.

The increased power has been more than matched with a 14% cut in fuel consumption and a 29g/km reduction in CO2. Whether you're someone who buys their own petrol or a business user with a wary eye on benefit-in-kind tax, you're quids in.

You'd have to drive the revised car back-to-back with the old 2.0 TFSI to fully appreciate the improvements, but the fruitier exhaust note is an obvious giveaway that things have changed under the bonnet. You won't fail to be impressed by the new engine's smoothness and broad range of pulling ability, though it doesn't need the six speeds in both the manual and DSG gearboxes: three are enough to cover almost any eventuality.

The new engine is available in all permutations of the TT coupe and roadster. Move quickly, though, just in case they decide to change it again.

Just when you thought it couldn't get any better