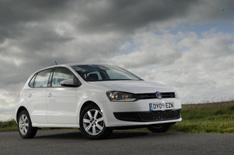 We love the new Volkswagen Polo it's comfortable, classy, well priced and well equipped. However, with five engines on offer, which one should you pick?

The range kicks off with two three-cylinder 1.2 petrols giving either 59bhp or 69bhp. We wouldn't bother with the lower-powered one it needs to be thrashed to achieve any sort of meaningful pace, and because it's a three-cylinder engine, it thrums away noisily when you work it hard.

The higher-powered version is a little keener to pull from low revs, making it easier to drive, but it's still not as flexible as we'd like.

For the easiest life, go for the 84bhp 1.4, which is much perkier than the 1.2s. It doesn't cost that much more to run, either, plus it's much smoother and quieter. In a posh supermini such as the Polo, that's important.

The 1.4 is also available with VW's DSG semi-automatic gearbox, which changes gear smoothly and reduces fuel consumption slightly. It's pricey at 1200, though.

Diesel fans can have one of two 1.6 engines. The 74bhp version feels decidedly flat until the turbo chips in, so again, flexibility can be an issue. We haven't tried the 89bhp version yet.

There's another snag with the diesels. Yes, both return more than 65mpg, but they cost a lot more to buy than the 1.4 petrol. So, that's our pick of the range for now, but we suspect it could be ousted early next year when a turbocharged 1.2 version comes along.

For the best blend of abilities, go for the 1.4 petrol