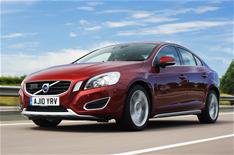 Volvo will introduce two new 1.6-litre engines to its S60 and the new V60 ranges later this year.

The engines which are made of aluminium to save weight are quoted as having 177lb ft of torque, but the stronger T4 engine has an overboost function, which gives 199lb ft for a brief period.

When specified with the standard six-speed manual gearbox, they come with an engine stop-start system. You miss out on that if you pair the T4 engine with the optional six-speed Powershift semi-automatic transmission (which is not available with the T3 engine), but it does automatically disengage the gear when the driver releases the accelerator while the car is moving to reduce rolling resistance.

Volvo is yet to confirm details of the engines fuel economy or emissions, but the company says that they should give up to a 20% improvement in both over engines of similar size and similar performance.