More for you |
Every 5-star car on What Car?Used test: Maserati Levante vs Porsche MacanNew issue of What Car? magazine on sale nowMost and least reliable small SUVsRevealed: the car makers whose discounts have got bigger since lockdown
Home
News
What they said
news 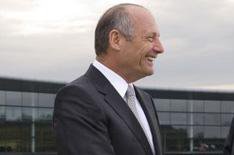 'Sports cars are all about efficiency, and every subsequent car we launch will take steps forward in this direction.' Ron Dennis, chairman.

'Developing our own engine was fundamental to what we are doing. It cost us more this way, but it was worthwhile.' Sheriff.

'In time, we will form a special department to help customers who might want to race the car, but as for forming a works team it's not fundamental to our plan. We have enough of a challenge getting a production facility up and running in 14 months.' Dennis.

'Since 1966, when McLaren first entered Formula One, 106 teams have come and gone, and of the teams who were around then only ourselves and Ferrari have been continuously involved. So, it was imperative to broaden the basis of this company and this is the next logical step.' Dennis.

Watch the McLaren press conference in full
See what Ron Dennis, Jenson Button and Lewis Hamilton had to say...