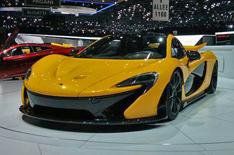 The McLaren P1 supercar has been unveiled at the 2013 Geneva motor show.

McLaren has also revealed the supercar will cost 866,000 when it goes on sale later this year.

Its petrol-electric hybrid powertrain combines a 727bhp 3.8-litre twin-turbo V8 with a 176bhp electric motor which also allows the P1 to drive on electric power only for around 12 miles. The power is delivered to the rear wheels through a seven-speed dual-clutch semi-automatic gearbox.

Bespoke Pirelli tyres come as standard, while custom-made carbon-ceramic brakes are designed to dissipate heat as quickly as possible.

The production version of the P1 is virtually unchanged from the concept car that was shown at the 2012 Paris motor show. The only visible change is the addition of air vents ahead of the front wheels, which are designed to aid cooling and increase downforce.

Just 375 P1s will be built and all will be left-hand drive.